It’s no secret that the world we live in is filled with harmful energies. From everyday emotionally negative encounters to dangerous EMF waves and even large-scale tragedies such as mass shootings, each of these events have a way of affecting our inner chakras and unbalancing our energies.

Poorly aligned chakras can manifest in a variety of ways like difficulty sleeping, vague body pain, anxiety, depression, unexplained recurrent illness, and so on. That’s why we all must find ways to reorient our chakras and protect them from further harm…that’s where orgone pyramids come in. 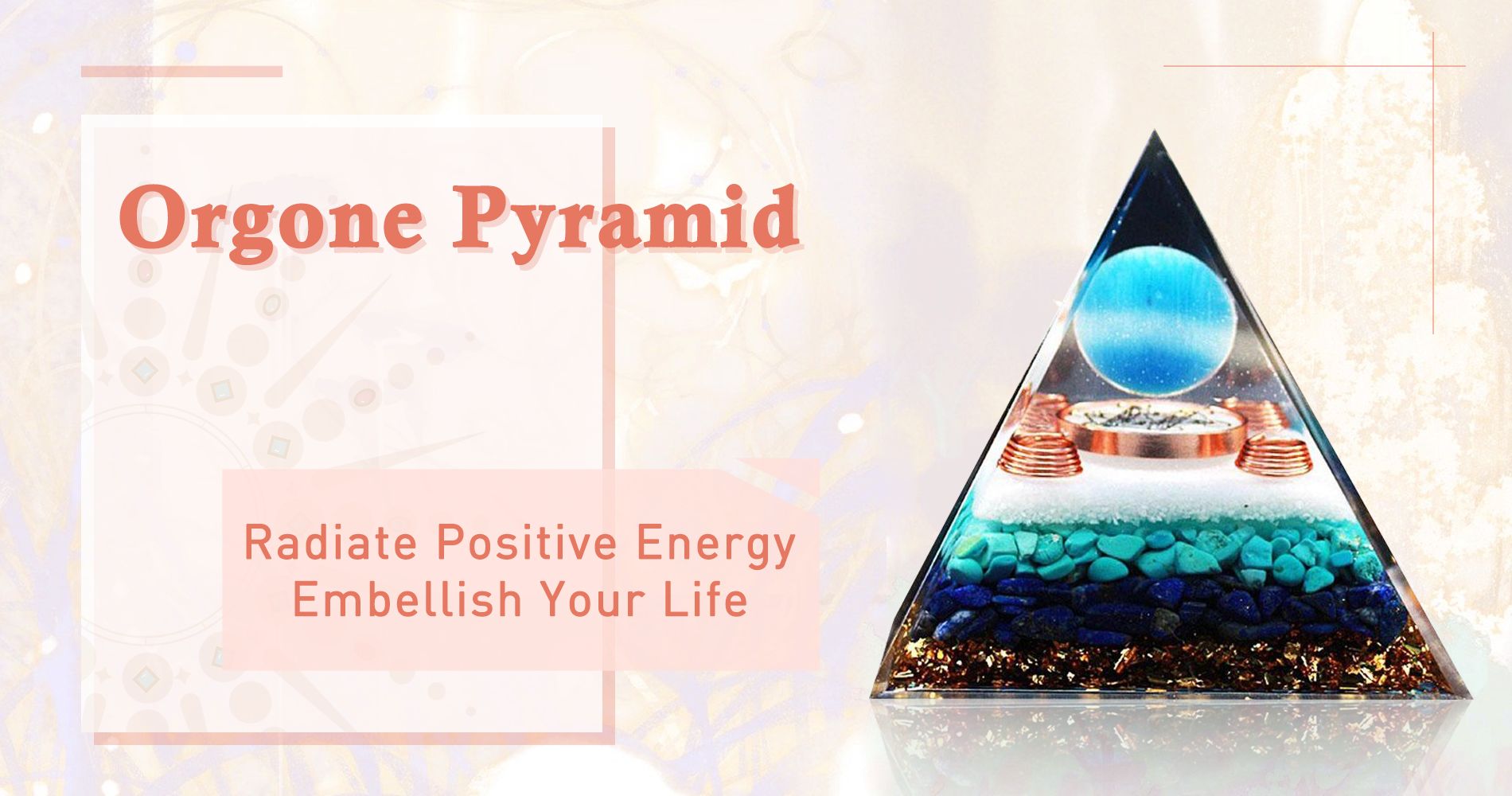 What Is an Orgone Pyramid?

An orgone pyramid is a special item known as an orgone energy accumulator which is used to convert negative energies into positive forms, realign chakras, meditate, and protect the user from harmful external and internal energies. It is usually made from a special blend of healing crystals and peculiar metal shavings which have been arranged in a specific pattern and encased in a resin composite.

What Is the Principle Behind the Orgone Pyramid?

The orgone pyramid is based on the concept of “orgone”, which was popularized by Wilhelm Reich in the 1930s. According to this concept, orgone is a massless substance that is closely associated with living beings and the energies they give off and is therefore always present anywhere that life exists. This is similar to ancient principles such as chi, prana, chakra, or universal energy.

Orgone has also been supported as a possible source of zero-point energy, the mysterious, barely detectable energy that objects seem to possess even at absolute zero (the temperature at which an object should theoretically possess no detectable kinetic energy).

By arranging a mixture of special crystals and metals, this energy can be detected, harnessed, and manipulated to achieve various outcomes. Metals like stainless steel, copper, and zinc act as filters that absorb and negate negative energies, while the crystals are positive energy amplifiers which increase the efficiency of this process and also help filter out negative energy directly. These two components work in tandem to create an area of high-energy positive energy amplification. 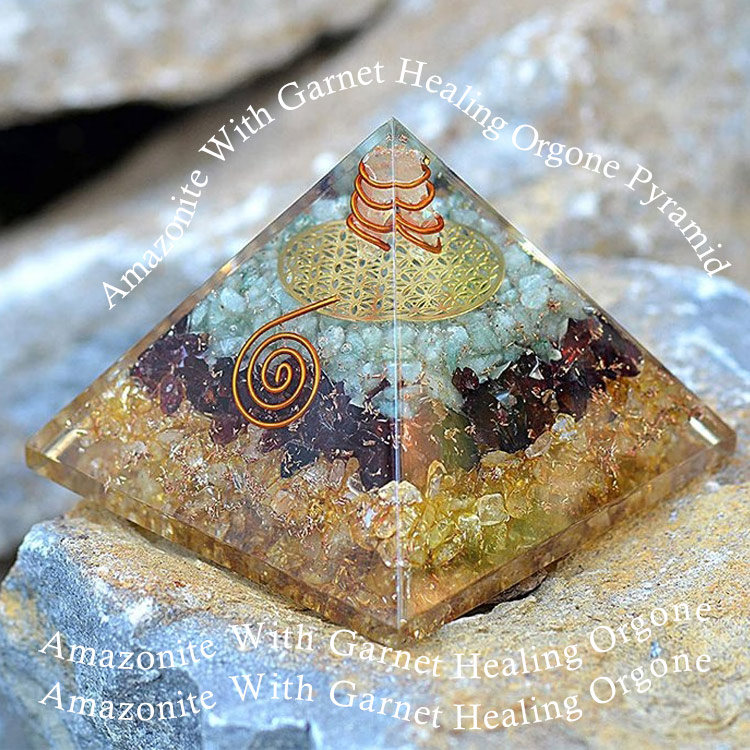 Benefits of Using an Orgone Pyramid

Here are some of the orgone pyramid benefits you stand to gain.

There is a wide range of unseen harmful energies all around us. This includes natural energies like negative individuals and tragedies, to synthetic ones such as the EMF waves emanating from everyday household gadgets, electric and high energy government equipment like the Ground Wave Emergency Network (GWEN), and High-frequency Active Auroral Research Program (HAARP). An orgonite crystal creates a protective aura around you which protects you from these harmful energies and detoxifies the body and mind.

In severe cases or on prolonged exposure, powerful emotional disturbances or negative energies may cause your chakras to become misaligned or blocked. Orgonite crystals are a useful meditation and healing aid which can be used to correct the flow of energy through your body. You can also carry a miniature orgonite around as a necklace which should rest over your heart (Anahata chakra) or throat (Vishuddha chakra), both of which are strongly associated with emotional stability. 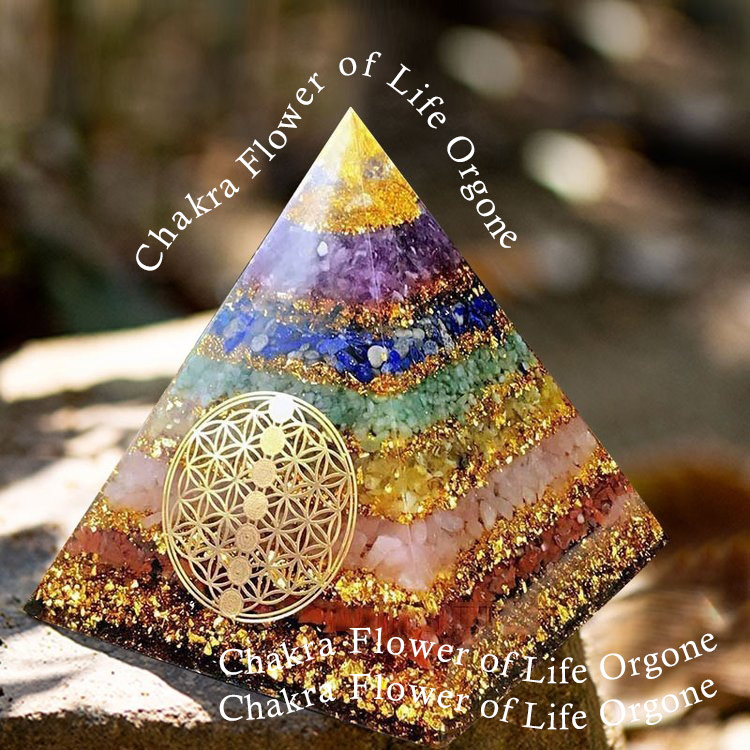 3. Healing of the Body and Mind

Not all afflictions of the mind and body can be solved with orthodox treatments. Negative energy and misaligned chakras may manifest as a wide range of symptoms ranging from unexplainable pain, sleep disturbances, changes in bowel habits, anxiety, depression, frequent tiredness, and so on. Orgone pyramids can be used during healing sessions to revitalize body tissues and cleanse the mind as well.

Orgonite has been promoted for its sexual enhancement properties. In fact, the original proponent of the orgone theory, Wilhelm Reich, spoke extensively on the close relationship between orgone energy and sexual potency. Particularly he commented on its ability to enhance sexual satisfaction, increase “orgastic potency”, and its promise in the treatment of impotency. 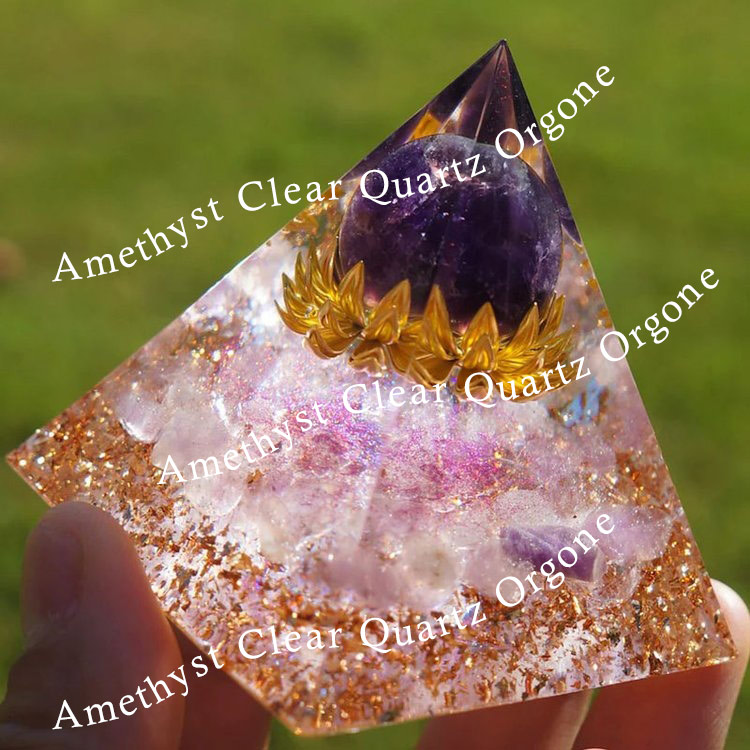 How to Choose an Orgone Pyramid

When choosing an orgonite crystal there are several key things you have to look out for.

Ensure you are purchasing orgonite crystals from trusted sources. Modern technology has propagated the mass production of fake crystals and substandard metals.

The Components of the Orgonite Crystal

It’s important to look at the individual components of an orgone crystal before purchasing one. Enclosed within the composite resin are different combinations of metals and crystals. Each of these metals and crystals has spiritual properties.

For example, copper is known to attract good luck and financial prosperity, silver is great for detoxification, and white gold amplifies spiritual power. Clear quartz is a powerful crystal and is known as the master healer, bloodstone improves circulation, and obsidian helps with emotional stability. 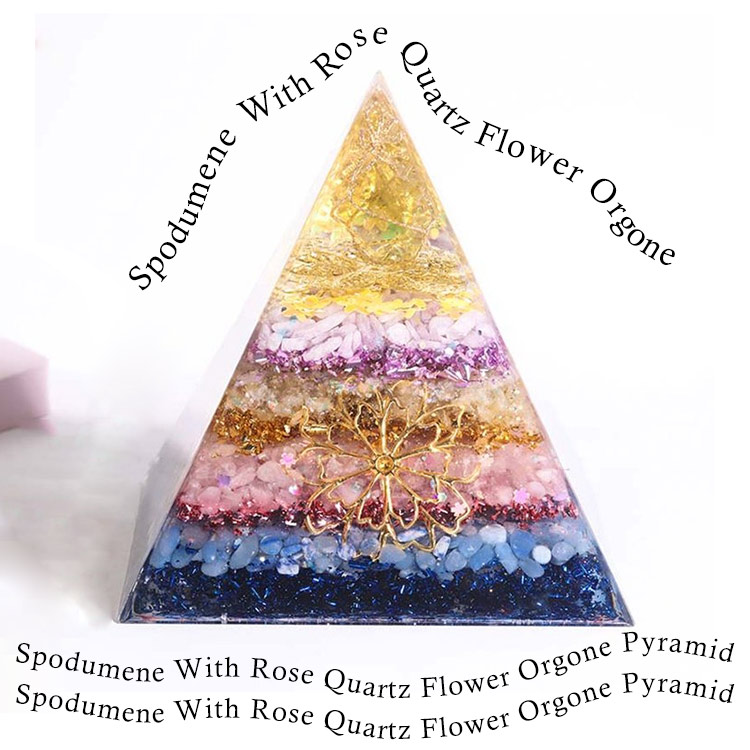 The Purpose of the Orgone Pyramid

Another important thing to consider is the function of the orgonite crystal. Large crystals can be used as protective ornaments, while smaller crystals can be carried around as bracelets, necklaces, and so on.

How To Use an Orgone Pyramid

Orgone pyramids can be used in several ways to maximize their effects.

1. It Can Be Used as a Conduit During Meditation

As we mentioned before, the crystals within an orgone pyramid also act as amplifiers which can be used to focus your energies and more effectively channel them during meditation. A great way to do this is to place the crystal flat on your palm, focus your energy on it, and in turn try to feel the energy resonating from the crystal.

Once you have detected this and feel you’re in sync with the energy of the crystal, use it as an amplifier and filter to cleanse and strengthen yourself, those around you, and your environment. Send out prayers of light, love, and healing. You can communicate your intentions by talking out loud with conviction, whispering as if speaking to a lover, or praying with your mind. You can also use a mantra to help you clear your mind and focus.

2. Carry the Crystal With You

Many users also opt to carry a piece of the crystal, typically as a pendant. This helps them ward off negative energies and creates a positive aura around them wherever they go. It’s also a great place to draw strength from when faced with a sudden challenge or moment of weakness. Crystals also transcend time and distance, so even placing a crystal near a picture of you can have a similar effect to having one near you constantly. 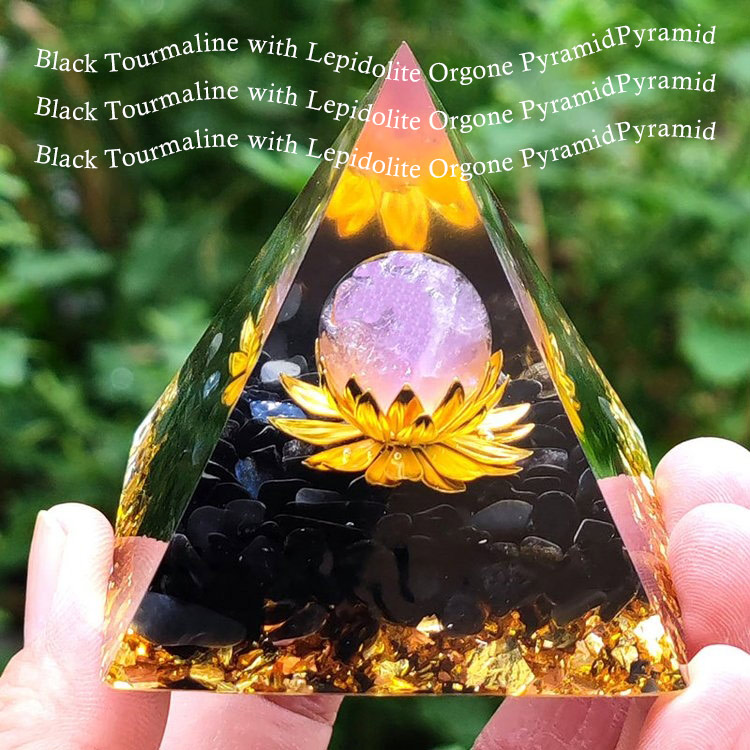 3. Place the Orgone Pyramid in Your Immediate Environment or Anywhere Around You That Requires Cleansing

Placing an orgone pyramid in areas you spend a significant amount of time is also a great idea. Have several pyramids placed within strategic areas of your home like your bedroom, living room, front door, and so on. You can also attach it to a wind chime to help amplify the healing powers of the sounds of nature or place small pieces on your ceiling fan.

Also, placing an orgone pyramid on your desk at work is a great idea because places of employment are high-stress environments and a significant source of negative emotions.

4. Bury Orgone Pyramids Around EMF Towers and Other Sources of Radiation

Burying large orgone pyramids around sources of harmful EMF radiation can help reduce the harmful effects they have on those living or working within that immediate vicinity. Remember, do not bury anything near such structures if it will get you in trouble with the law.

5. Place a Piece of Crystal Underneath Your Pillow

Orgone crystals can be placed underneath the pillow while sleeping to remedy sleeping issues such as insomnia, nightmares, nonrestorative sleep, and so on. It’s also a good idea to have a brief meditation and cleansing session before going to bed to help imbue the crystal with energy and cleanse your mind. 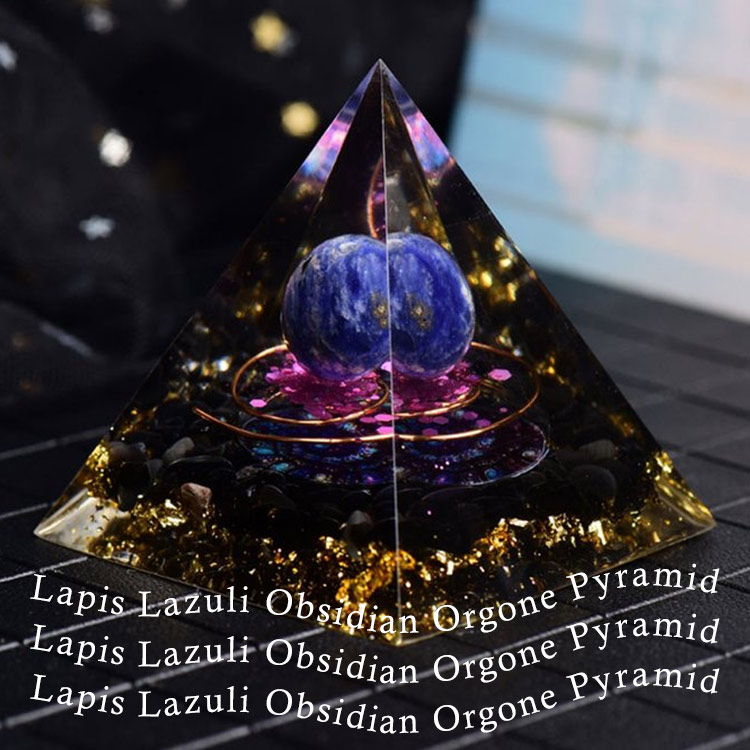 6. Place a Piece of Crystal in Your Fridge

A lot of the foods we eat today have been contaminated by both natural and synthetic toxins. Placing a piece of orgone crystal within your refrigerator not only helps detoxify your food but also helps keep the taste fresher for a longer period and delays spoilage.

7. Use It to Protect Your Pets

Orgone pyramids are not just great for people, but pets too! Our furry friends need all the love and protection they can get as well. Try placing a crystal on their leash or hanging one over their cage. Smaller crystals can be a potential choking hazard, so keep this in mind when placing them anywhere near animals.

8. Use It to Cleanse Other Crystals

This is one of the most powerful and important uses of an orgone pyramid...it can be used to detoxify and rejuvenate the energy within other healing crystals! Simply place the crystals around your orgone pyramid, preferably outside or by a window so it can absorb energy from the sun (the primary source of all energy) and feel them recharge. You can also meditate during this process to help strengthen the cleanse.

9. Take a Bath With the Crystal

A great way to detoxify your body is to take a long bath with an orgone crystal submerged in the water. The crystal imbues the water with the healing energy and allows it to gently absorb the harmful energies and toxins from your body. 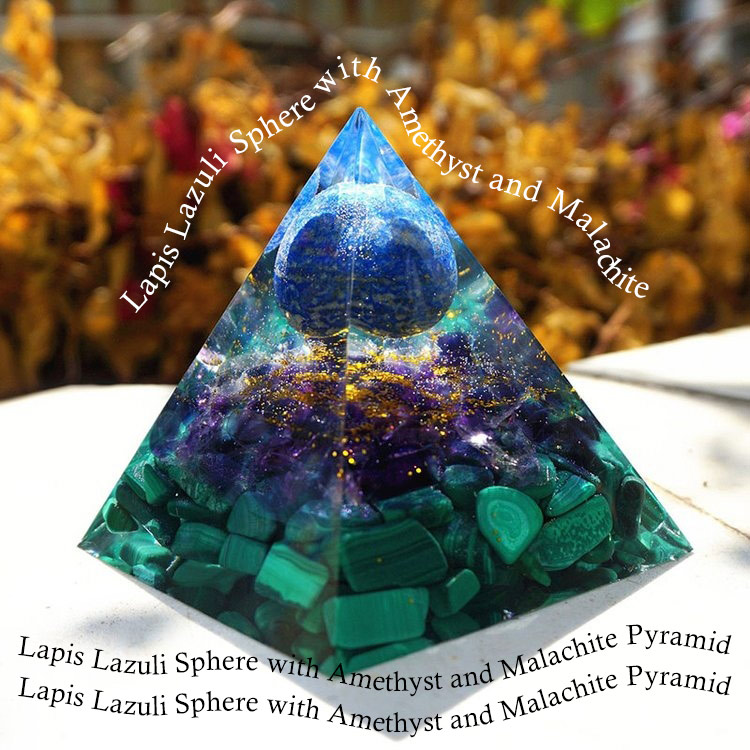 Orgone pyramids are a great way to cleanse the aura around you and revitalize your body, mind, and soul. They are also a great conduit for meditation and prayer, help detoxify your food and water, and purify the environment around you. They come in a wide variety of sizes and components, each of which should be tailored closely to your physical, mental, and spiritual needs.