The Top Orgone Products That Ever Orgone Practitioner Should Own

Orgone energy is a universal force that exists all around us and is intimately related to life itself. It is one of the primordial building blocks of life and is considered by some as the hidden link between the body, soul, and mind. 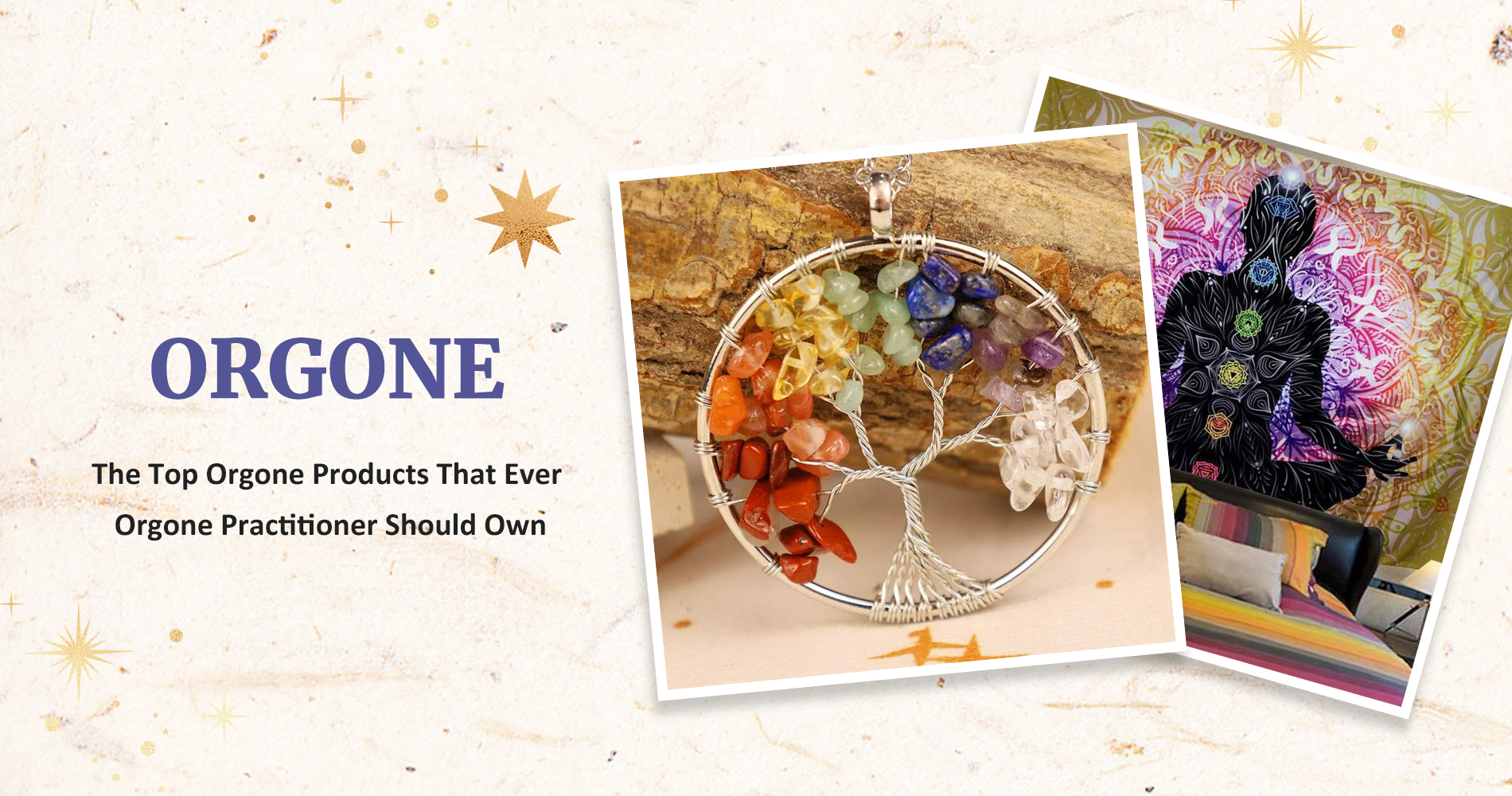 Understanding the Power of Orgone Energy

As we mentioned earlier, the concept of orgone energy was popularized by Wilhelm Reich in the 1930s. According to him, orgone is a massless substance that is closely associated with living beings and the energies they give off and is therefore always present anywhere that life exists. This is similar to ancient principles such as chi, prana, chakra, or universal energy.

Orgone has also been supported as a possible source of zero-point energy, the mysterious, barely detectable energy that objects seem to possess even at absolute zero (the temperature at which an object should theoretically possess no detectable kinetic energy).

Hindrances to the passage of orgone energy through the body can manifest in a variety of ways. These may include sleep disturbances, anxiety, depression, vague aches, unexplainable illnesses, and so on. Several objects can be used to detect, harness, and control the flow of orgone, leading to rejuvenation of the body, soul, and mind.

There are quite a few objects with the ability to harness orgone energy. In this article, we’ll take a look at a few popular orgone accumulators, as well as a few you might not have heard of before.

Orgone pyramids are some of the most well-known orgone products. This is a special blend of healing crystals and peculiar metal shavings which have been arranged in a specific pattern and encased in a pyramid-shaped resin composite. Each of these components has a unique function and they work together to ultimately normalize the flow of orgone around you.

The crystals within the pyramid function as amplifiers and negative energy cleansers which help to convert harmful radiation like EMF waves into positive energy. The metals act as filters that help remove these harmful energies from the environment.

The composite resin allows these inclusions (the metals and crystals) to be housed together in a particular pattern which affects the potency of their effects. It also helps balance the pyramid by providing an organic counterpart to the inorganic components (metals and crystals).

Pyramids have long been considered symbols of the connection between life and death by numerous cultures over many millennia. Crafting the resin in this shape helps amplify this bond and strengthens the ability of the object. Orgonite crystals can also be crafted into necklaces. These have several uses and are much more convenient for individuals who prefer to carry their orgonite crystal with them. It provides a mobile source of protection and creates a healing aura around you that converts negative energies into positive ones.

Another great thing about orgonite crystals is that they can be tailored closely to the needs and desires of the wearer. Many crystals and gems are associated with specific properties and advantages. Those with the knowledge of orgone energy and how it operates can use this to bend the will of the Universe in their favor.

For example, gold has long been associated with prosperity and wealth, while clear quartz is a crystal of visualization and clear thought. Combining these two inclusions into an orgonite crystal necklace will create an atmosphere around you that attracts financial opportunities and gives you the foresight to think clearly, which is perfect for the workplace.

Another great thing about orgonite crystal necklaces is their proximity to the Heart Chakra. The Heart Chakra is also known as the Anahata Chakra. It is commonly associated with compassion, forgiveness, empathy, and love.

Individuals struggling with these emotions may be exposed to significant disturbances in the flow of energy through their Heart Chakra. An orgonite crystal necklace is a great way to heal this, as well as help them come to terms with these emotions in a healthy way. A pendant is a loose piece of jewelry that is commonly worn on a chain of some sort. Pendants are commonly worn as necklaces but can be used as other pieces of jewelry as well. Since we’ve discussed the use of orgone necklaces, let's dive into how orgonite crystal pendants can be used in bracelets and anklets too.

Bracelet orgonite crystals are mobile and easy to wear, as well as powerful in the hands of someone who understands how to utilize the palm chakras. The ancients have long hypothesized a relationship between the chakras on different parts of the body and their connections to specific points on our hands.

The closest chakra to the wrist in this system is the Root Chakra, also known as the Muladhara Chakra or the first chakra. The primary center of this chakra is the base of the spine, so utilizing the connection between the Root Chakra at the wrist and spine is a great way of dealing with lower back pain. The Root Chakra also symbolizes stability, security, and vitality.

Orgonite crystals can also be worn as anklets, especially when the wearer is trying to establish a closer connection to the earth. Even though virtually every healing crystal can be mined from the ground, some healing crystals maintain a closer relationship to the earth and the qualities it embodies.

These crystals are usually referred to as Earth Elementals and include stones such as smoky quartz, tiger’s eye, petrified wood, black obsidian, iron pyrite, black tourmaline, and so on. Some of the qualities these crystals collectively represent due to their close relationship with the earth include patience, practicality, thoughtfulness, stability, trustworthiness, and hard work. Orgone blankets were one of the original inventions of Wilhelm Reich. These were specially designed blankets which allowed the user to capture the ambient orgone energy in the environment and channel it into the user as a regenerative force.

Making an orgone blanket is quite easy. It only requires a few simple items like 100% organic wool, several packages of very fine (000 or 0000 grade) steel wool, some organic cotton thread, and a sewing needle.

The first layer of the blanket should be made of wool, with the steel wool making up the next layer. This pattern is repeated until there are four layers of organic wool, with three layers of fine steel wool in between them. These layers are now stitched together with the organic cotton thread.

Orgone blankets have several uses. They can be used to cure ailments like chronic pain, fatigue, sleep disturbances, nonrestorative sleep, and so on. They also help increase your orgastic potential, increase sexual potency and help improve libido.

Things To Consider Before Using an Orgone Product

Orgone products are quite effective and have a wide range of uses which will be discussed later. However, before purchasing an orgone product there are some factors every user should consider. The Authenticity of the Product

Even though it would be ideal if we could all craft our orgone products ourselves, this may not be possible. Therefore, you must ensure that every orgone product is purchased from a reputable source and that you are fully satisfied with the quality of the product. You can also attempt to feel a deeper connection to the energy of orgone all around you simply by holding the product and channeling your consciousness through it.

The Purpose It’s Meant To Serve

Each orgone product has some uses that it’s best suited for. For example, orgone pyramids are great protective ornaments for your home and place of work. However, they can be quite cumbersome to carry about. In such a situation an orgonite crystal pendant or necklace would be a much better option. The Components of the Orgone Product

As we mentioned previously, each of the inclusions within an orgonite crystal has peculiar properties associated with them. Tailoring these to your unique tastes is a great way to enhance its potency and ensure that you get the most satisfaction from your orgone product.

Benefits of Using an Orgone Product

Let’s take a quick look at some of the awesome benefits you stand to gain from orgone products. Orgone products are simply amazing and are a great addition to your collection. They have a wide range of uses that can be carefully tailored to your specific desires. They are wholesome and healing, with the ability to help you achieve a deeper connection with the orgone energy all around you and the Universe as a whole.