How To Make Orgone Pyramid？

Orgone Pyramids got popularized from20th Century and was formulated by an Austrian Psychoanalyst named Dr Reich. So what is it? Well, Orgone Pyramid is a mixture of semi-precious stones crystals, quartz, metals and resin that are combined together in order to balance the life force energy, also known chi, orgone or prana. This combined energy is considered the strongest energy in the world. It resonates global Schumann fundamental frequency of about 7.83 Hz. Though it sounds pretty complex, this energy is actually pretty easy to make and anyone can make it right in the garden by collecting and using various cheap materials available in the nearby locality that balance the energy we are surrounded by converting the negative energies into positive ones. The resonance of the Orgone is considered the heartbeat of the earth.

The healing effects of the individual metals and stones used in the pyramid increase and strengthen when compressed in a pyramid form. As the stones are added to the mixture to form a pyramid, the resin starts charging them electrically & pulls all the sem0prceious stones together.

People often think that the concept of the Orgone Pyramids is not backed by science but the truth is it actually does. As per scientific studies, it has been proven that orgone accumulators have some effect on the human body. 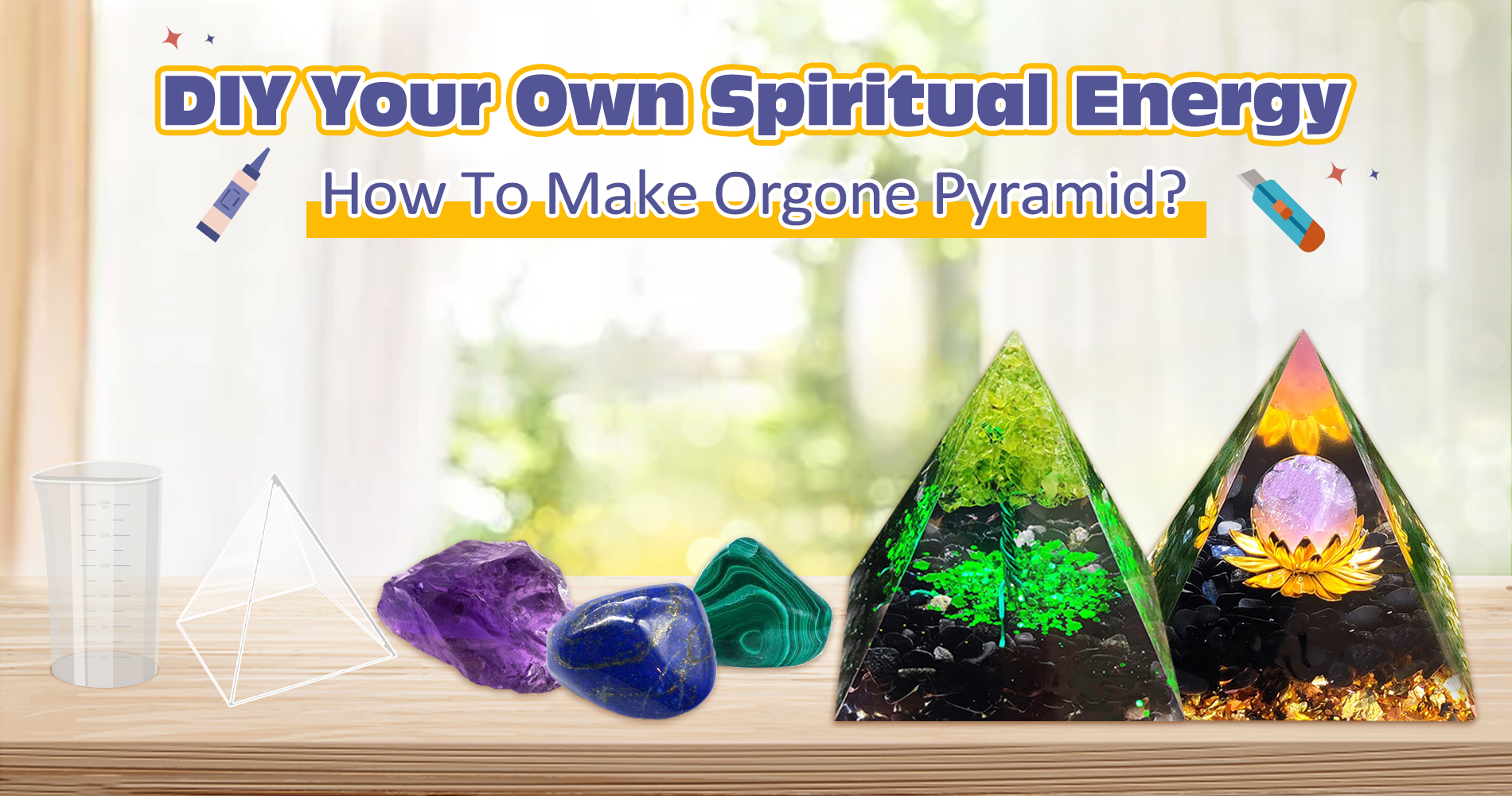 Why do we Need Orgone Pyramids?

An Orgone Pyramid is made by mixing crystals with composite resins & metal shavings. While the procedure goes on, resin compounds tend to contract and it further compresses the crystals in layer one. This compression is what adds effectiveness to the pyramid. With the use of various materials of the earth, the compression process acts as a positive energy generator. As we all know that copper increases intuition, black tourmaline helps to improve self-confidence & improves the power of understanding & rose quartz is associated with inner peace and harmony. 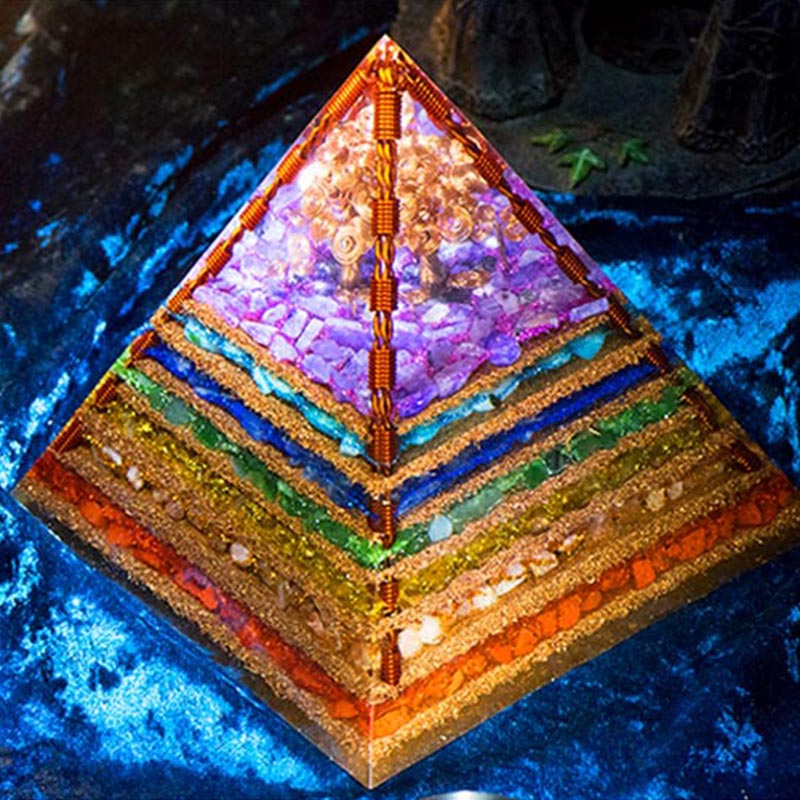 Following are the reasons why one needs Orgone Pyramid 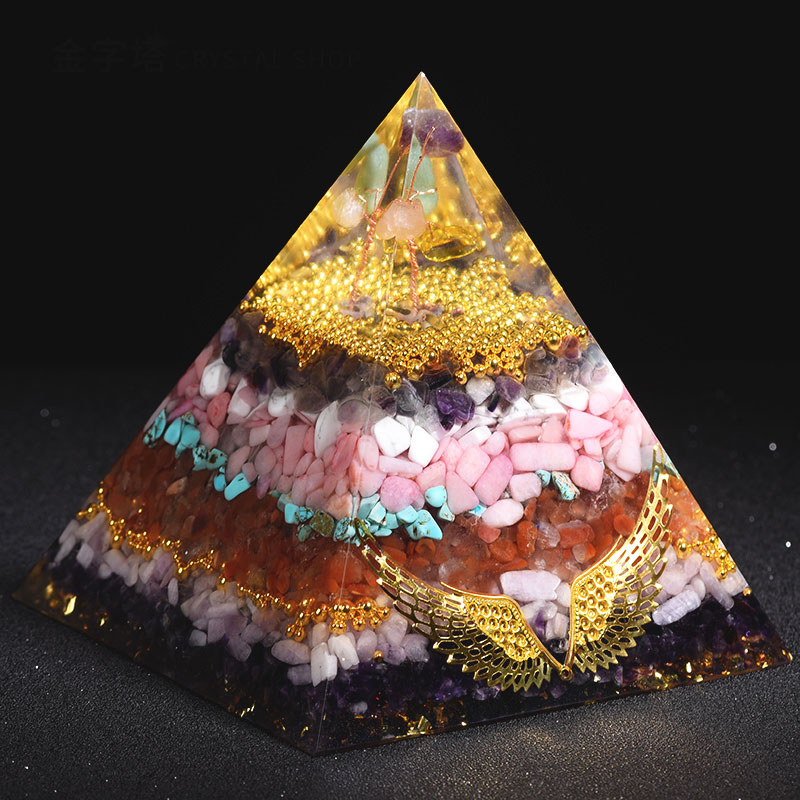 Is it worth it to make your Own Orgonite Pyramid?

A DIY project on Orgone Pyramid is quite a fun task. By accumulating simple materials available from nature and turning them into a pyramid one can balance the energies in one's home. But this task is expensive. One needs to buy expensive materials and accumulate them together to change the negative energies at your home into positive energies. But if you are looking for a cheaper version to protect your home and workplace from negative energy you can try using GEO cleanse which is a cheaper alternative. Therefore though this DIY project might sound pretty fun, it is quite expensive. People who like to experiment with gems and crystals can go for it or else it's better to buy inexpensive products from the Orgone Energy line which serve a similar purpose. 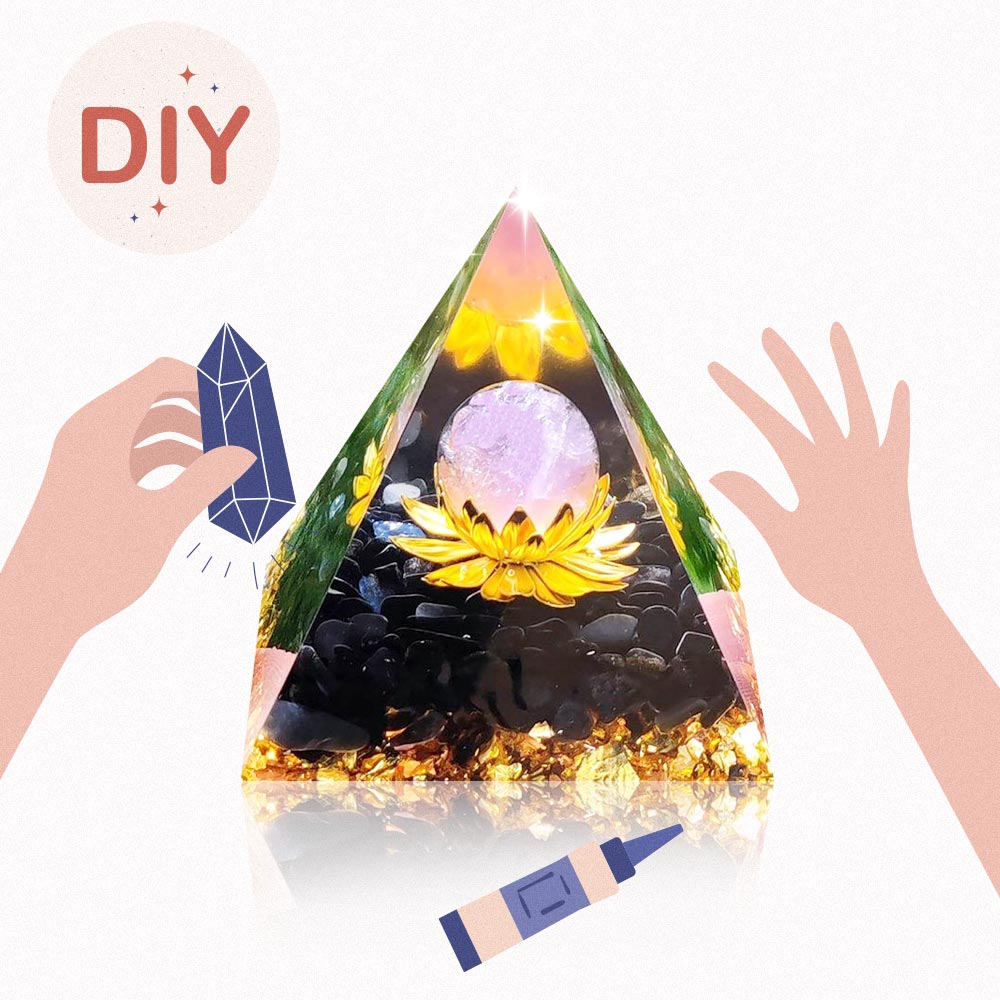 What You Will Need?

As mentioned earlier, making an Orgone Pyramid might be a little expensive. For this you will need the following: 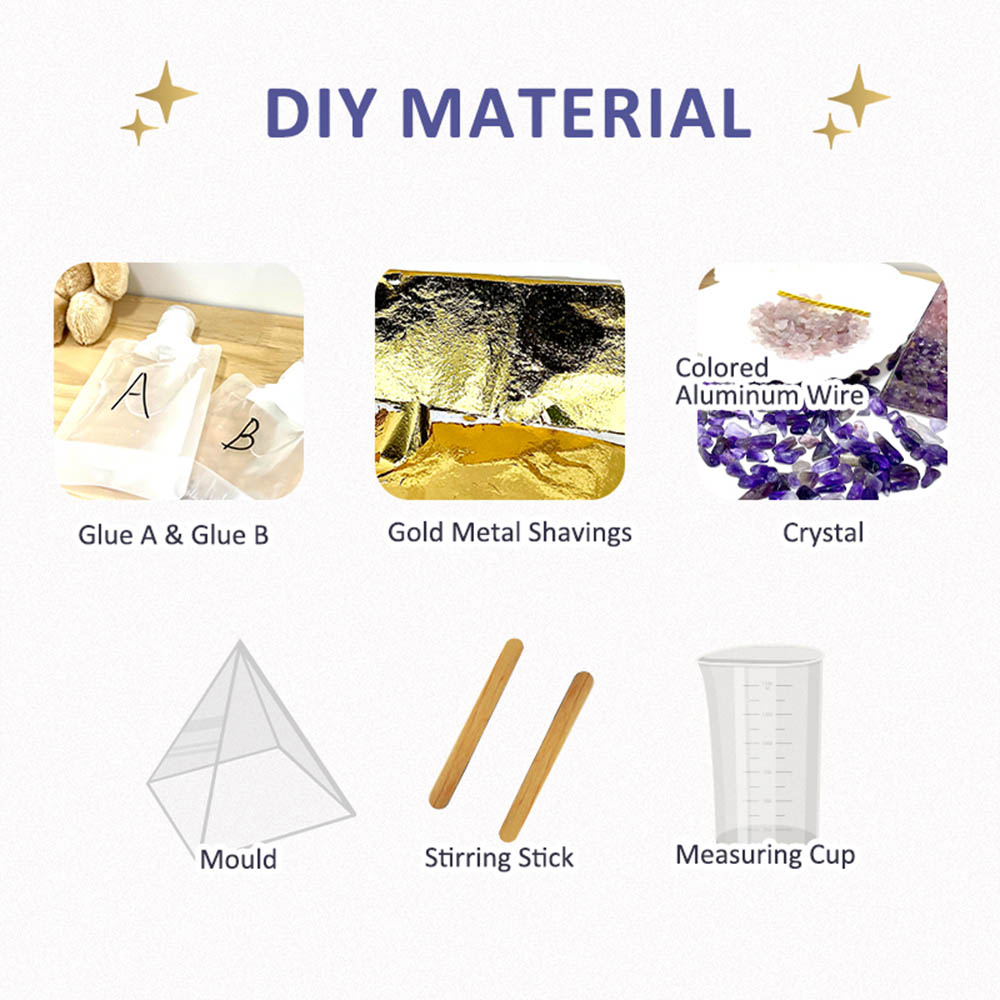 How to make very basic orgonites:

Apart from the major materials required you will also need a mixing container, a wooden stick, some old rags, a bucket, some paper towels in case of any spills & splashes and any flat a large surface to let the orgonite harden. Steps to Make the Organ Pyramid of the Tree of Life

Before starting please choose a place that is hygienic and clean to prevent contamination of the pyramid from any pollutants. Once the glue is prepared it should be used immediately. Therefore don't make an excess amount, make it in a small batch.

Step 1- First add the very first layers of the crystals and next adjust the metal wires accordingly to a length and shape as per your requirements & smoothly place it inside the crystals.

Step 2: Pour the two types of glue A & B in a 3:1 ratio in the measuring pots, stir it for a few minutes and directly pour it inside the mold. The glue needs almost 24 hours to set completely at an average of 25 degrees centigrade. Note that the higher the temperature the faster the glue will set.

Safety comes first! Note that all the materials are kept away from children as they can be deadly if consumed. Also, wear gloves while doing the project to avoid any mishaps. 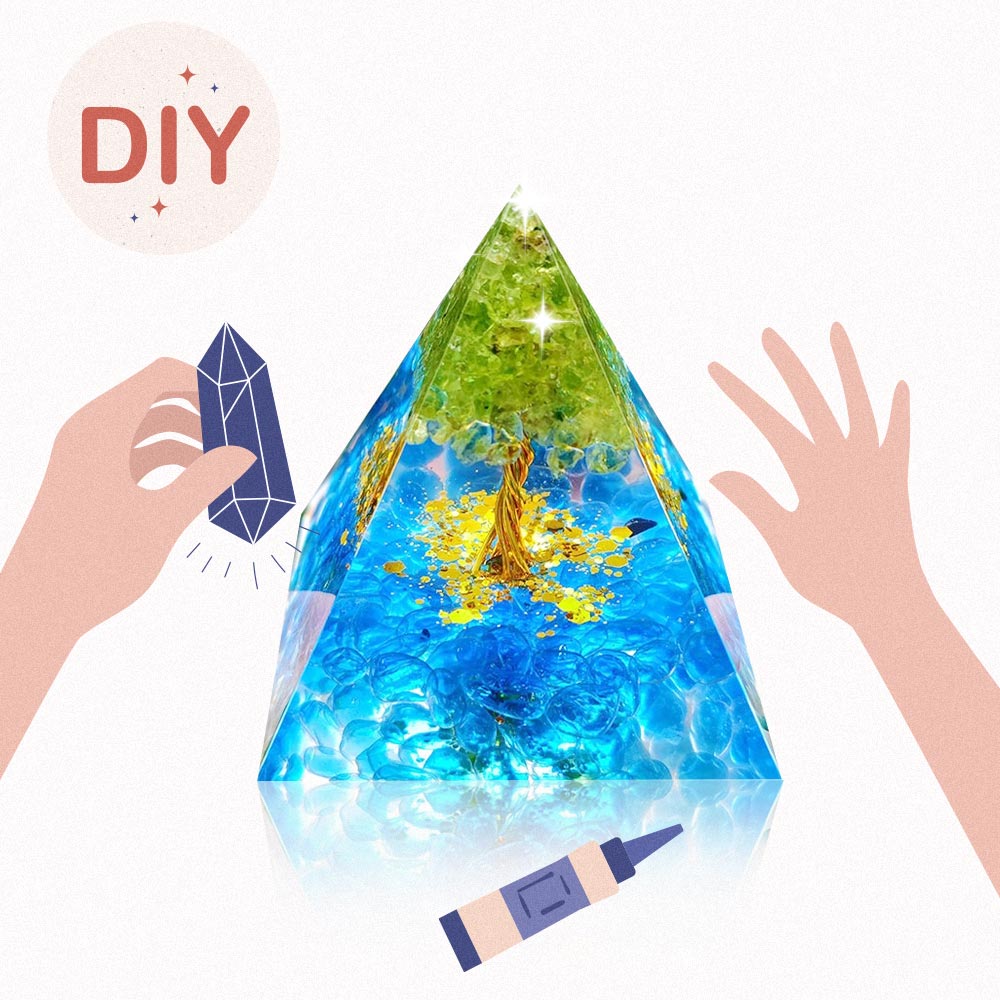 Steps to Make the Orgone Pyramid of the Sphere

Step 1: place the mold horizontally & make glue in small batches. Mix the glue A and B in a 3:1 ratio.

Step 2: Now put the crystal ball inside the mold and pour the glue mixture to cover the sphere completely. You can use a small stick to adjust its position. Now, let it set for 24 hours.

Step 4: Next add the crystals and crushed stones inside the mold and add a portion of the glue mixture and let it sit for the next 24 hours at a twenty-five-degree centigrade temperature. The higher the temperature the faster the glue will set. An Orgone Pyramid will help to remove toxic energies around you and your home. Placing an orgonite device will at the corner of your home will enhance your and your family's physical and mental wellbeing. So make your own orgone device or purchase a readymade one and keep your home protected.